Cape Agulhas (Cape of the Needles) is a rocky headland in the Western Cape of South Africa. It is the geographic southern tip of Africa and the official dividing point of the Atlantic and Indian Oceans.

We begin the tour driving southeast on the N2 from Cape Town via Sir Lowry’s pass heading towards the Cape Overberg a region of rugged mountain ranges, picturesque vistas, rolling wheat and canola fields. At the top of Sir Lowry’s pass we stop for an opportunity of a picture shoot and a spectacular view of False Bay lying below.

The journey continues through the beautiful green, gold and brown citrus orchards of the overberg, further on at a Farm stall off the N2 we stop for some refreshments, thereafter our trip takes us through the small town of Caledon a town established in the 18th century to cater for travellers seeking relief and healing at the near by hot springs over the the past three centuries.

In Bredasdorp, we visit the Shipwreck museum home to striking visual displays and a fascinating collection of shipwreck artifacts and a treasure house of figureheads and lifeboats, porcelain, cannons, anchors, old bottles and coins from a number of European countries.

Before the Suez Canal was constructed a trade route between Western Europe and the East was established round the tip of Africa along the coastline of Cape Agulhas this part of the route proved to be treacherous for ships passing by resulting in it being named the graveyard of ships. In 1840 international pressure, especially from Eastern Cities and also from London resulted in the decision to establish a lighthouse at the foot of Africa which was later known as the Cape Agulhas light house. 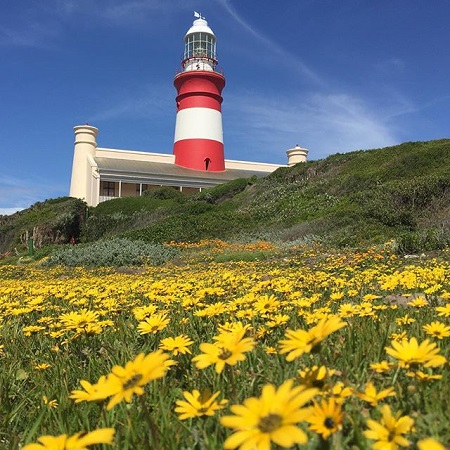 The light house which was styled on the famous Pharaohs light house of Alexander in Egypt, was initially powered by a candle- fueled from the fat of fat-tailed sheep of the area. In 1849 the candle powered light house shone for the first time. Today the beam has a range of thirty nautical miles and an intensity of 7500 000 candlepower.

The light house is about one kilometer from the southernmost tip of Africa.

Cape Agulhas is a must see, according to the Hydrographic Society this is where the Indian and Atlantic oceans meet which is the most southern tip of Africa.

After experiencing the southernmost tip of Africa we return to Cape Town via the town of Hermanus known as the (whale capital) and drive through the scenic Clarence drive. If time permits we visit the endangered African penguins at Stony Point